This guest blog post comes from Chinosity.com. Chinosity.com is an online media platform that delivers news on Chinese entertainment and modern cultural phenomenon to a global audience.

The 2020 Tokyo Summer Olympics are coming up, and China will be vying to reach the top of the medal tally once again. However, one sport will not be included in the events list, despite China’s efforts to include it since the 90’s.

This sport is Wushu. But what is it really? 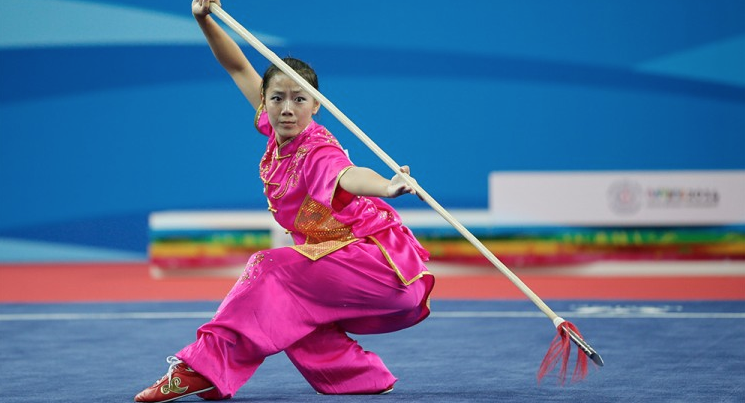 Wushu  (武术) literally translates to “Martial Arts”. It is a contemporary sport created from a mix of Chinese traditional martial arts. Modern Wushu is mainly performance-based, with more with choreographed sequences and flashy moves (though some athletes do practice sparring).

Do people do that in actual combat???

Probably not. The best way to think about Modern Wushu is to think of it as a performance sport like figure skating or gymnastics. Don’t expect anything too realistic— it is pretty much what you would expect to see in a kung-fu movie. In fact, Wushu choreography even appeared in the Star Wars series- in both Rogue One and The Last Jedi!

What else do they do?

Besides fighting each other, athletes also demonstrate forms by themselves:

Sometimes they use weapons such as chain whips:

Jackie Chan even made a movie about it:

And this is barely scratching the surface! There are other barehand forms such as Southern Fist, Eagle Claw, and a strangely acrobatic Taichi. There are also other weapons such as straight swords, spears, monkey staff, and many more!

Excited yet? If so, look out for the 2019 World Wushu Championships in Shanghai when it rolls around in October this year! If you want to find out more about Wushu in detail, this blog post outlines it pretty well.