Celebrated on the 5th day of the 5th month of the traditional Chinese lunar calendar, the Dragon Boat Festival (龍舟節/龙舟节), also known as the Duānwǔ Festival (端午節/端午节), is a beloved holiday across China and Southeast Asia. It has become an occasion for Chinese-speaking communities around the world to gather in riverside parks, enjoy dragon boat races, and snack on zongzi.

Since it’s coming up soon—it falls on June 3rd this year—we thought it would be a good time to give a quick overview of this important holiday. This post will explore five keywords related to traditional Duanwu festivities and share fascinating stories and side notes about each term. And at the very end, we’ll reveal the festival’s surprisingly dark origins! 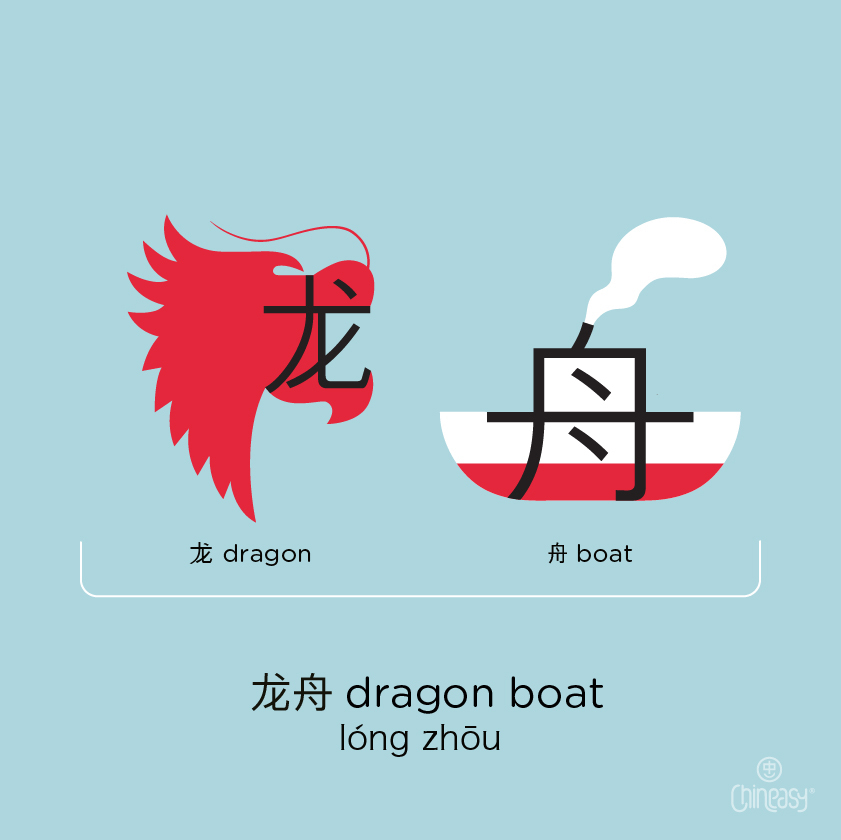 As the name implies, dragon boats (龙舟/龍舟) are designed to look like dragons, the formidable rulers of the river in traditional Chinese culture. In honor of these auspicious creatures, the boats are typically ornamented with a carved dragon head at the prow and a carved dragon tail at the stern as well as colorfully painted dragon scales along each side.

For the annual race, some dragon boat teams train year-round. On an individual level, the challenge lies in learning how to properly paddle. Each rower must lean forward to cut the water with their oar and then lean back and twist as they draw their oars back and out of the water. Plus, the whole team must be in sync, moving through the motions at the same time and with the exact same rhythm. Not as easy as it looks, is it? 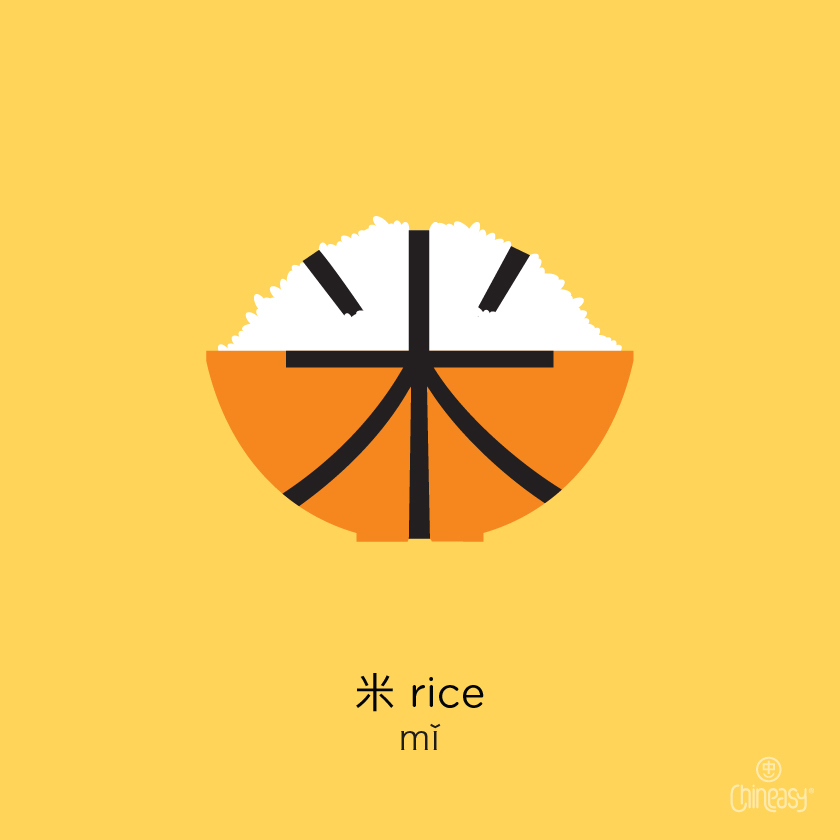 The character 米 originally represented a scattering of uncooked rice grains in the different compartments of a storage shelf. 米 generally refers to husked, uncooked rice, which just happens to be the main ingredient of zongzi (粽子; zòng zi). And if you look closely at the character 粽 (zòng), you can see its 米 (rice) component!

A friendly word of caution: Even if you love rice-heavy dishes, make sure to pace yourself with zongzi. They are not made with white rice but instead with glutinous rice, which takes far longer to digest. So if you eat them too quickly, you could easily upset your stomach! 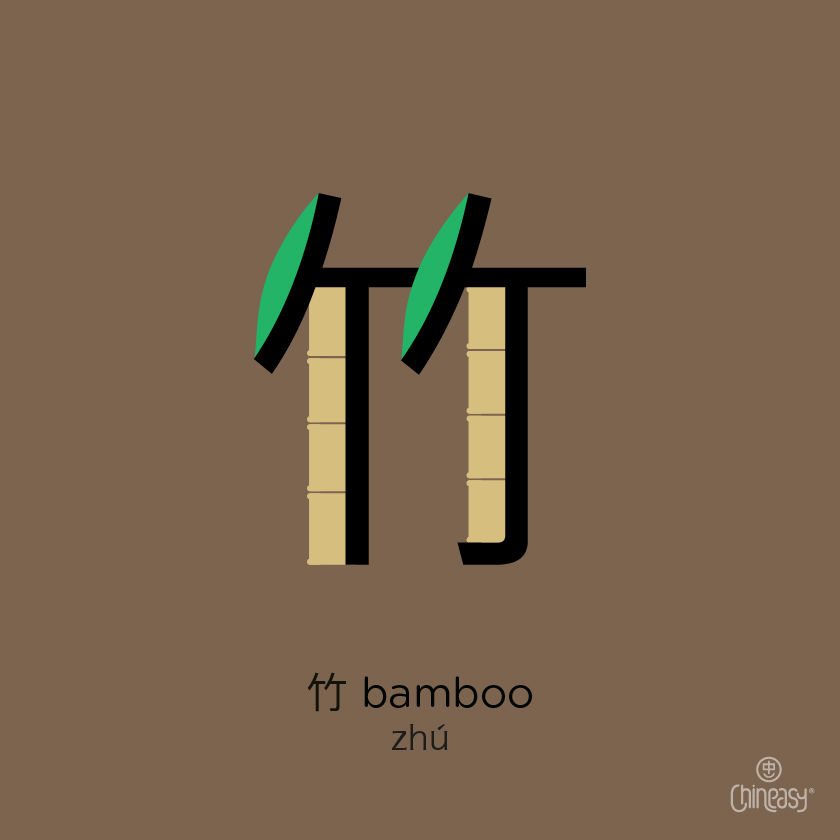 The character 竹 resembles two stalks of bamboo with leaves at the top. The leaves are referred to in Chinese as 竹葉/竹叶 (zhú yè; bamboo + leaf) and are commonly used to wrap zongzi (粽子). For such culinary purposes, fresh bamboo leaves are typically preferred because they are more pliable and aromatic.

But who are the biggest consumers of bamboo? Pandas (熊貓/熊猫; xióng māo), of course! In recent years, however, scientists have discovered that they have trouble digesting the fibrous plant. Even though pandas are herbivores, their gut microbiome is made up of bacteria better suited for digesting meat! 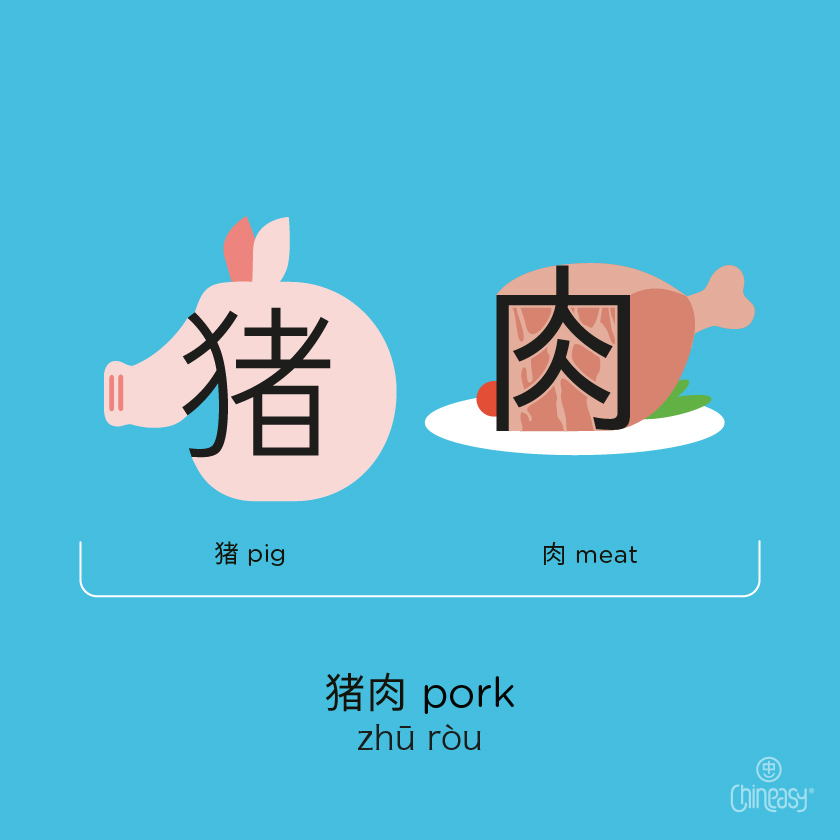 In addition to rice, the bamboo leaves of zongzi encase numerous exquisite fillings. The go-to choice for most meat-eaters is 猪肉, or pork belly in particular, which requires a certain amount of prep work. Before the pork can be wrapped in rice, it must be marinated overnight. 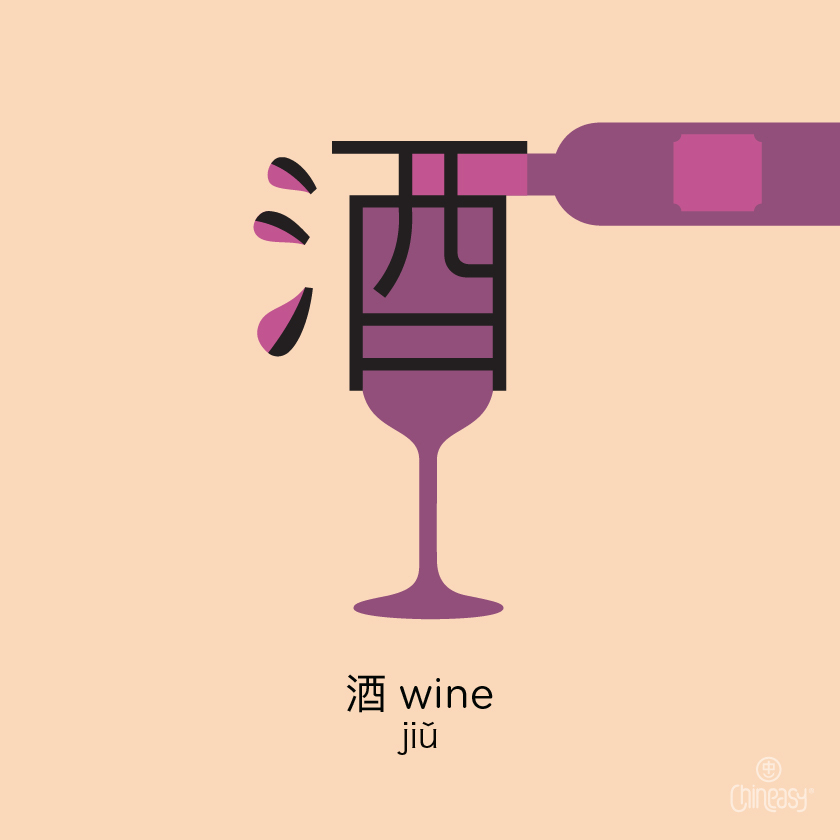 The character 酒 is made up of the radical氵(the water radical) and the character 酉 (wine vessel). And what other liquid would you serve from a wine vessel than…wine? Nevertheless, the Chinese character 酒 is much broader in meaning than the English word “wine.” It is used as a general term for alcoholic beverages, including wines, liquors, and spirits.

In the olden days, during the Dragon Boat Festival, Chinese people would often imbibe a concoction known as realgar wine (雄黄酒; xióng huáng jiǔ). The yellow-orange drink was considered a magical antidote for different afflictions—from disease to evil spirits—that were thought to crop up during the hot summer months. But since it’s blended with arsenic sulfide, realgar wine is usually no longer on the menu for the festival. Phew, right?

Lastly, to keep our promise, let’s venture briefly into the dark side…

*** The Origins of the Dragon Boat Festival ***

There are multiple origin stories for the Dragon Boat Festival (龙舟节/龍舟節;  lóng zhōu jié) but the most common one revolves around the suicide of famed poet and statesman Qu Yuan (屈原; qū yuán).

During the Warring States Period (475 – 221 BCE), there were seven individual kingdoms—Qi, Chu, Yan, Han, Zhao, Wei, and Qin—fiercely contending for land and hegemony. From the relative security of the state of Chu, the scholar-official Qu Yuan watched with growing concern as the Qi military invaded and conquered the five other states one by one. Fearful that Chu would be next, Qu advised his king to ally with the remaining free kingdoms in order to save the Chu people. Unfortunately, corrupt court officials were more persuasive in their arguments and Qu’s wise advice, which later proved prophetic, went unheeded and ignored. Qu was later exiled by the king and the state of Chu eventually fell to the Qi army. When Qu got word of the defeat, he was overcome with despair and threw himself into the Miluo River in northeastern Hunan.

The legend goes that local fishermen, who had witnessed Qu jump into the water, rushed to their boats and raced out to save him, but they were too late. In the days and weeks that followed, villagers began throwing sticky rice balls into the river to prevent fish from feeding on the poet’s remains. They also beat drums and struck the water with paddles to scare away evil spirits.

Throughout the years, these traditions continued and came to commemorate one of China’s finest poets and most loyal patriots. Today, despite its rather dark (and tragic!) past, the Dragon Boat Festival is a happy occasion that brings together communities and celebrates Chinese culture and camaraderie.