The first words that many children learn in their mother tongue are the names of animals—“cat,” “cow,” “pig,” “dog,” and the rest of the gang at Old MacDonald’s farm. Chinese children are no exception! From a very young age, Chinese children learn how to pronounce the names of different animals and recognize the words in their written form. They learn to identify animal-related Chinese characters (and associate them with their pronunciations) by reading beautifully illustrated picture books out loud with their parents and loved ones.

If you’re looking to spur your own children’s interest in Chinese, why not introduce them to Chinese-language animal picture books—a genre that perennially captures interest? To give you an idea of what you might encounter, let’s go through five of the most common Chinese characters for animals. 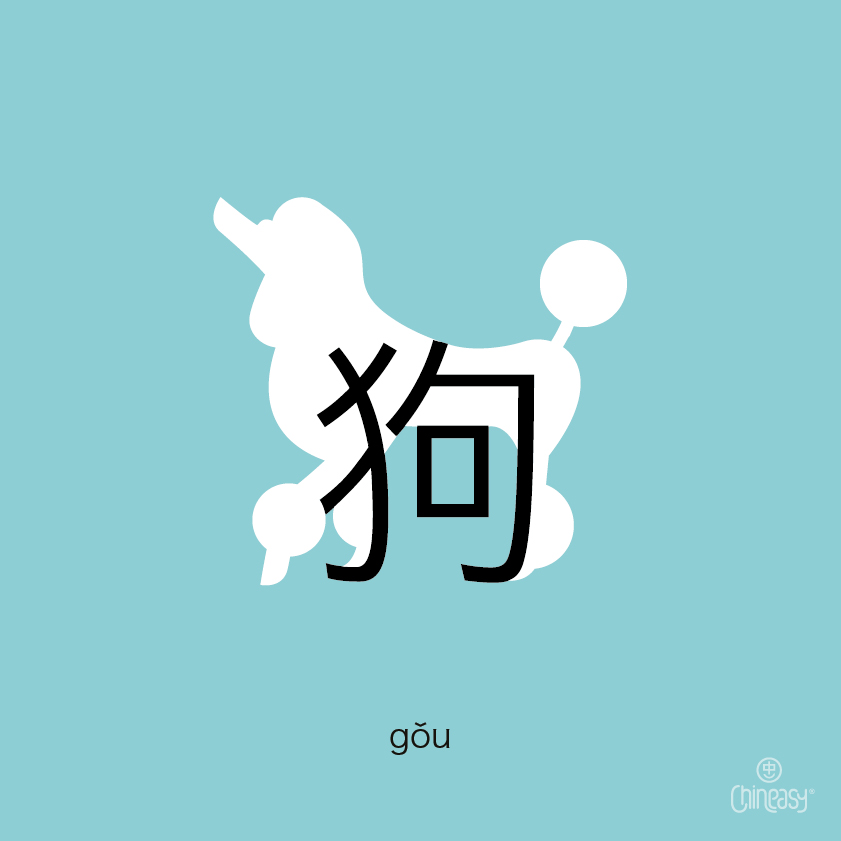 Man’s best friend in both Western and Eastern cultures, 狗 (dogs), are beloved for their affectionate demeanors and unswerving loyalty to their human friends and caretakers. So it’s not surprising that Chinese kids adore dogs and the character 狗! 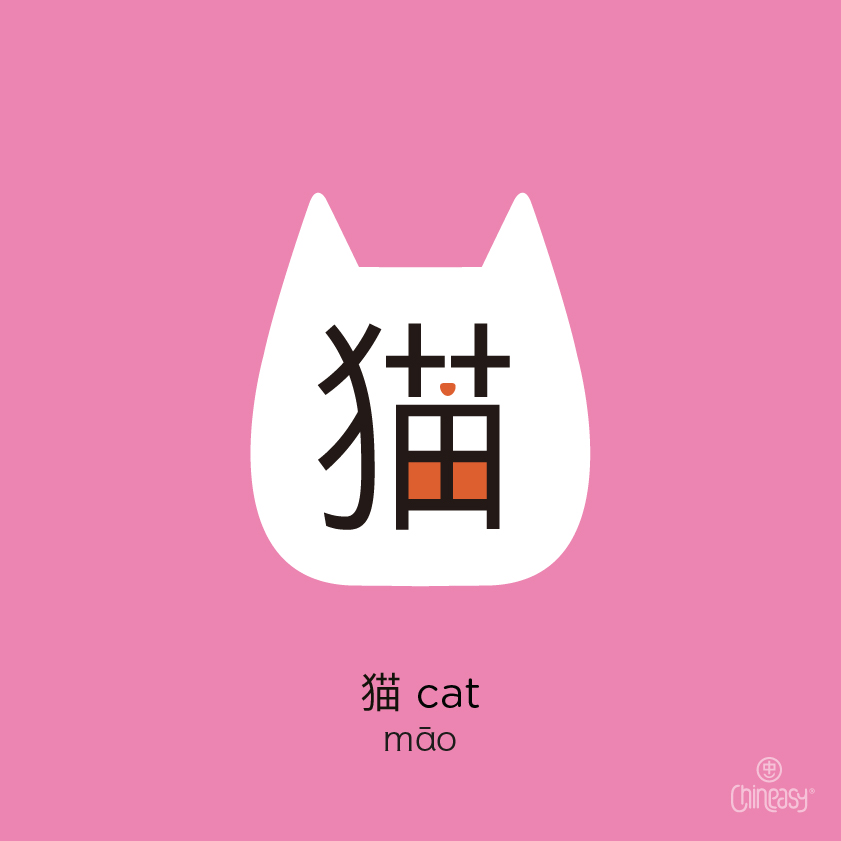 While the Japanese fondness for cats may be better known thanks to the iconic Hello Kitty franchise and the ceramic “beckoning cats” perched by the front door of many Japanese establishments, 猫 (māo) are also very popular among the Chinese. Legendary creatures in Chinese mythology, felines have long been appreciated for their mesmerizing stares and sharp hunting instincts, which keep household vermin at bay.

Side note: Did you notice that the simplified character 猫 is constructed with the same radical as 狗? Often referred to as “the animal radical,” 犭(quǎn) designates dog-like creatures and is found in the characters for numerous other animals, for example, 狮/獅 (shī; lion), 猴 (hóu; monkey), and 狼 (láng; wolf).

The traditional character 貓, however, features a different radical, 豸(zhì), which denotes “insects without feet” or “worm-like invertebrates.” It can be found in a few other animal names, such as the agile 豹 (bào; leopard/panther) and 貂 (dīao; marten). 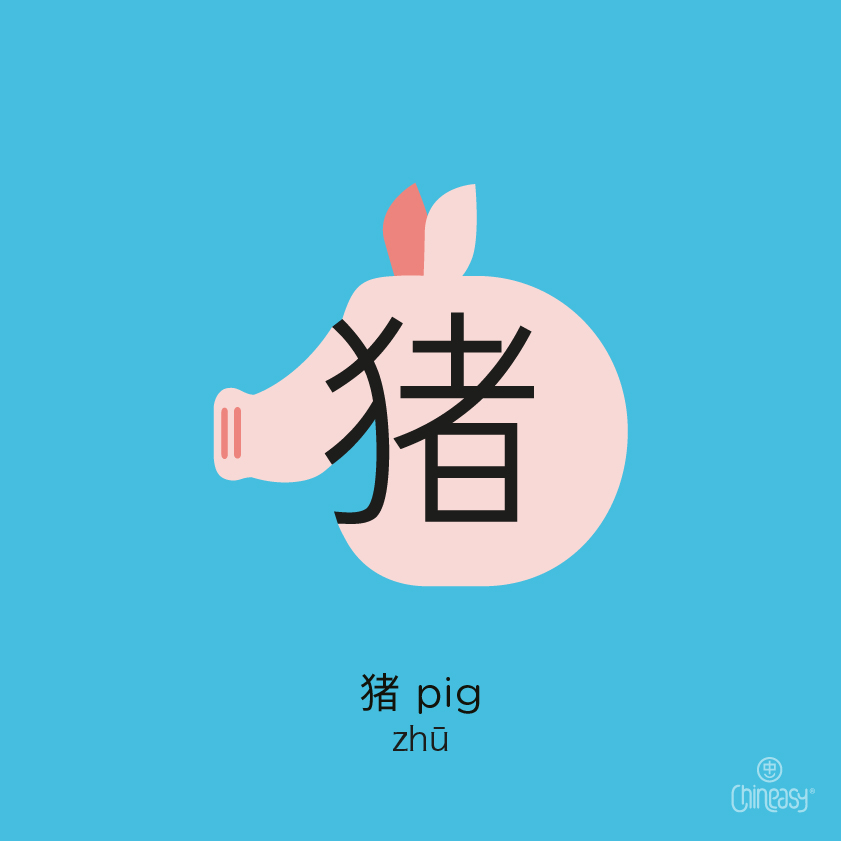 In Chinese culture, 猪 (zhū; pigs) symbolize prosperity and good fortune. They are generally considered lucky creatures from birth because they are always well-fed and cared for. This indulgent pampering may partly explain why the Year of the Pig comes last in the 12-year Chinese zodiac cycle. In a race called by the Jade Emperor to assign one year of the cycle to each of 12 creatures, both real and mythical, instead of rushing to cross the finish line to secure a prime spot in the zodiac, the pig merrily took its time, pausing along the way for a bite to eat and a leisurely nap.

You may have noticed that the simplified character 猪 once again comprises the radical 犭(quǎn), but what about its traditional counterpart 豬? Does the radical 豕(shǐ) look familiar? You have likely seen it placed under a ‘rooftop’ to form the character 家 (jīa; house/home). But, perhaps contrary to logic, it does not refer to “family” or “people,” but rather “swine”! That’s because this character dates back to over 2,000 years ago when domesticated animals were still typically kept indoors with their owners. 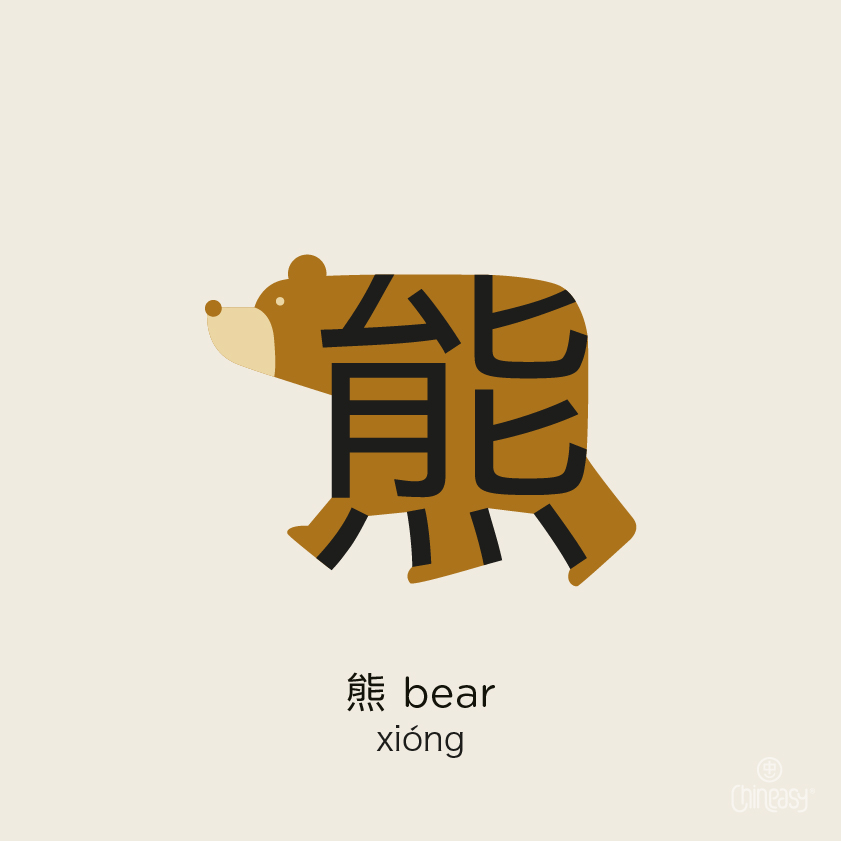 Soft, cuddly teddy bears have become indispensable companions throughout childhood for both boys and girls. But in terms of real-life bears, many children are charmed by China’s giant pandas, which are known as 大熊猫/大熊貓 (dà xíong māo; big + bear + cat) in Chinese.

Depending on how long you’ve studied the language, you might notice that the character 熊 is formed using another character 能 (néng; ability) and the radical 灬 (huǒ), which often appears as 火 and signifies fire. So what’s the etymology behind this character? What do bears have to do with fire? Well, during certain eras and among certain groups of people, bears have been recognized as the spirits of fire, and their fatty flesh has been prized for how easily it cooks over an open fire. 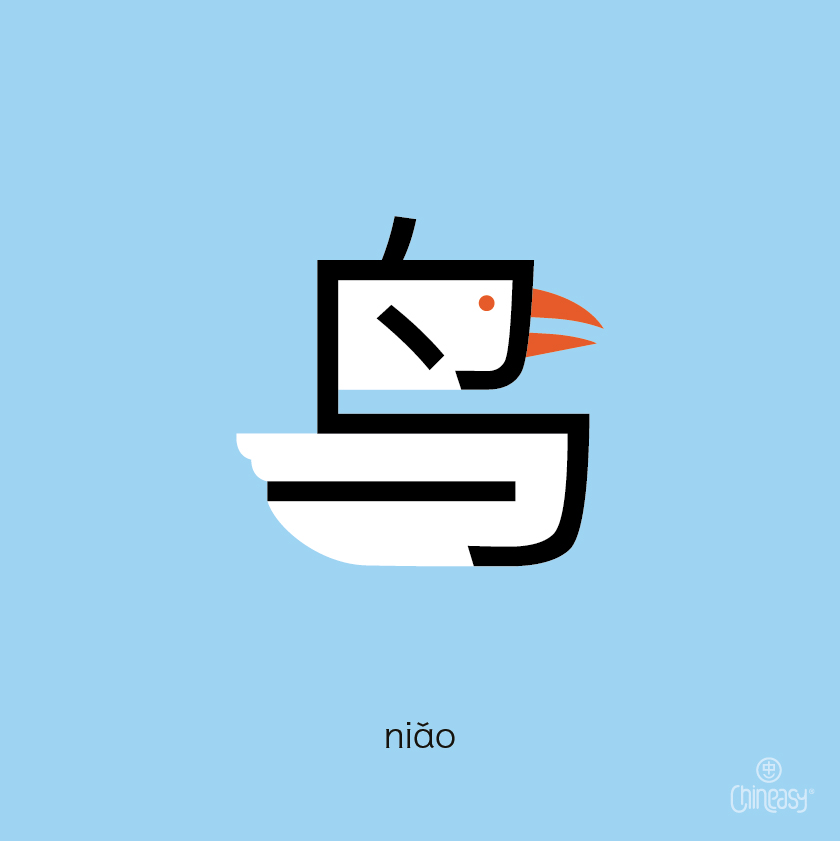 Maybe it’s because birds only have to take quick ‘birdbaths,’ or maybe it’s because of their freedom to migrate across continents—either way, many children are quite taken with our tufted friends and spend their afternoons imagining hopping from tree to tree or gliding through the clouds.

In Chinese, birds are represented by the pictogram 鸟 (niǎo), or 鳥, as it is written in the traditional form. If you study this pair for just a moment, you’re sure to pick out the bird’s beak, eye, wing, and feathers! And now you’ll be able to spot the same generic “bird” in other characters for specific species, for instance, 鸭/鴨 (yā; duck), 鹅/鵝 (é; goose), and 鹰/鷹 (yīng; eagle). Even if you’re not sure what sort of creature is being referred to, if there’s a 鸟/鳥 in the character, chances are it’s got two wings!