Now, let’s dive into what pinyin looks like by using the Chinese word “你好” (hello) as an example. The pinyin (sound representation) of 你好 is “nǐ hǎo,” two pinyin syllables in total. Each pinyin syllable corresponds to a single character, and in each pinyin syllable, it usually consists of three parts: vowels, consonants and a tone mark. There are 35 vowels, 23 consonants, and four tones plus a neutral tone. Within 35 vowels, they can be divided into 6 simple vowels and 29 compound vowels. It’s worth noting that in most Chinese textbooks and learning materials, you will see the terms “finals” and “initials” quoted instead of “vowels” and “consonants” respectively. Below is a typical pinyin chart. 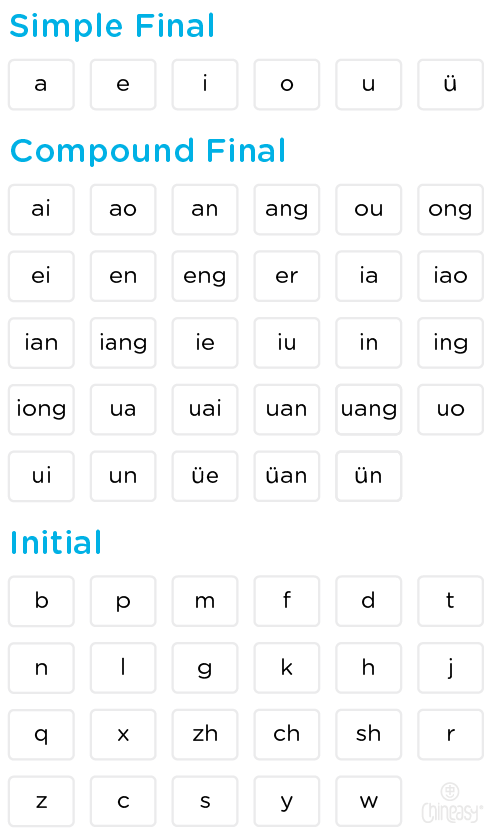 As for Mandarin Chinese tones, there are four tones and a neutral tone, namely first tone, second tone, third tone, fourth tone and neutral tone. See the illustration of tone marks below. As you may notice, there is no tone mark for neutral tone. Another point to bear in mind is that a tone mark is only placed above the vowel (final); it never goes above the consonant (initial).

You will see the tone marks come with a pointed arrow, e.g. →. The arrow indicates how the pitch of your voice should travel when pronouncing a pinyin syllable with a particular tone. Here we are going to highlight the characteristics of each tone to help you picture how they would sound like.

Chinese is a tonal language; it means when a syllable is pronounced in a different tone, it produces a different meaning. Therefore, it’s vital to pronounce Chinese words with their associated tone to avoid confusion.

Besides as a sound representation system, in recent years, pinyin has gained its popularity as an input method for typing Chinese characters on digital devices. So knowing the pinyin of Chinese words will certainly help you connect more Chinese speakers in the virtual world. Nowadays, most computers and mobile devices come with the pinyin input method. So why not give it a try—switch to pinyin input method and practice your Chinese typing skills?!

Lastly, we don’t intend to cover every aspect of pinyin. Instead, through the article, you’ve learned the most basic you need to know, including:

Hopefully, by now, you have a basic understanding of pinyin and make sure you look out for it when learning a new Chinese word.