How often do you look through your Chinese textbooks and try to find the words you want to know how to say in Chinese? Look no further because, in this post, we compile some words that are unlikely to be taught in most Chinese textbooks. So why learn them? You might ask. Because learning some unusual words makes your learning journey more unique and fun, and you may use them in one of the intriguing dialogues you have with your Chinese peers.

So, are you ready to learn them now? Read on! 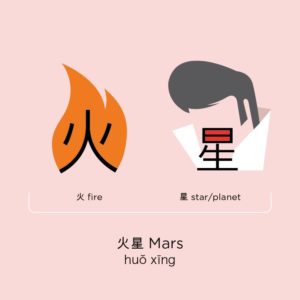 The origin of the name 火星 came from that our ancestors once believed that the planet was alight and looked like it was on fire (火)! 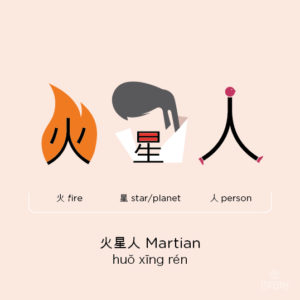 By adding the character 人 (person), we get a popular internet slang: 火星人. It is used to describe someone who shares outdated trending news, who clearly doesn’t keep up with the pace of society – just like a Martian (火星人) from Mars (火星) who doesn’t know what’s going on the earth! 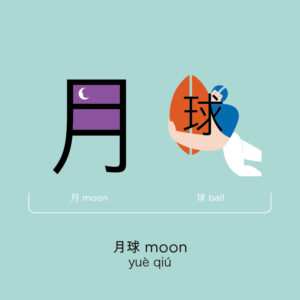 On July 20, 1969, 500 million people around the world watched live pictures on their black-and-white TV sets as two American astronauts walked on the moon for the first time. And, that’s the Apollo 11 mission. The Moon in Chinese is 月球, also known for 月亮 (yuè liàng).

The building block for moon (月) was originally derived from a pictogram of the crescent moon. It has now evolved to be a visual counterpart to sun (日). The character 球 combines the components 玉 (jade) and 求 (excessive demand). Originally, it depicted a beautiful and much-desired jade sphere. Today, 球 has evolved to mean “ball” or represent spherical objects.

Literally, the Moon is combined with “moon” and “ball.” Easy to remember, isn’t it? 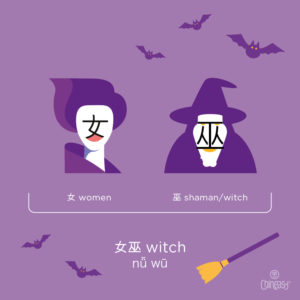 One of the earliest forms of 巫 (wū) depicted shamans dancing around a pillar and this origin also possibly influenced another character: 舞 (dance; wǔ), which shares a similar pronunciation of 巫.

We like this association – “witches” “dance” to call for help from the gods! After all, witches don’t always need to be portrayed as evil beings, right? 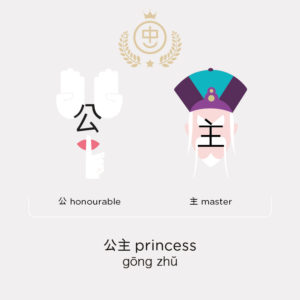 Only from the Han Dynasty, the term 公主 started to be used as the title for any girl who was born in the emperor’s family, even before she got married.