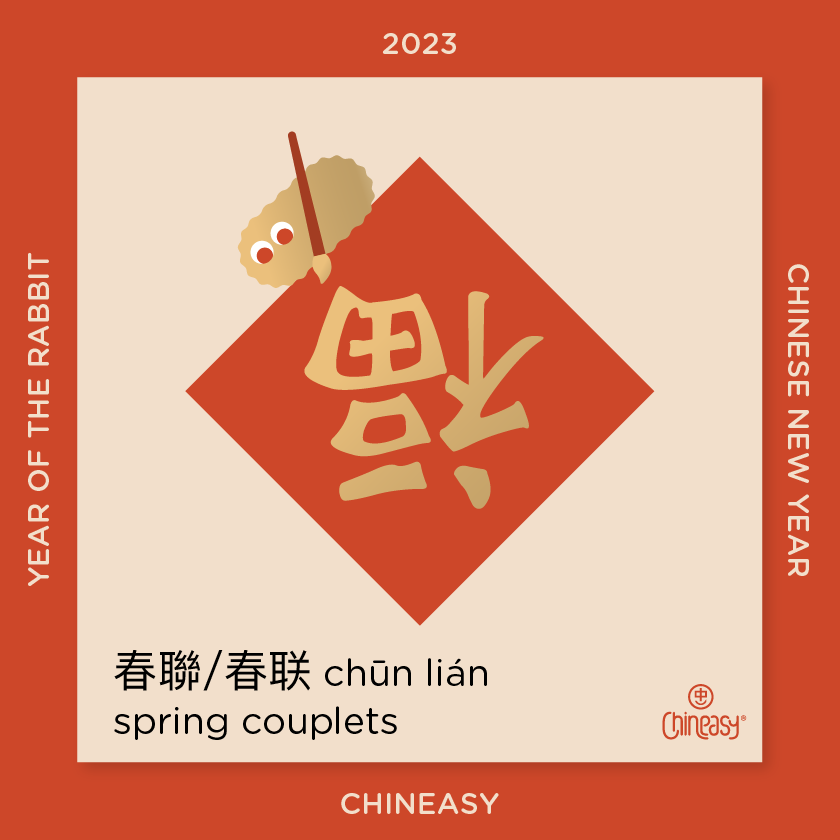 To the Chinese, the essence of the Spring Festival lies in the beautiful decorations – bright red lanterns, lavish flowers and plants – and of course, spring couplets! (春聯/春联; chūn lián)

Spring couplets are red paper strips with black or golden characters written on top. People hang them on their doorways, walls or windows to make wishes for the coming year. And some are turned upside down on purpose as a tradition. The reason? It’s all because of a pun. For example, the character 福 (fú; luck) is a very popular character written on 春聯/春联. So, when 福 is pasted upside down (倒), it creates a pun that implies “luck has arrived!”

👉 Fun facts: homophones and words that sound alike appear during Chinese New Year practice A LOT, especially when it comes to food. For example: 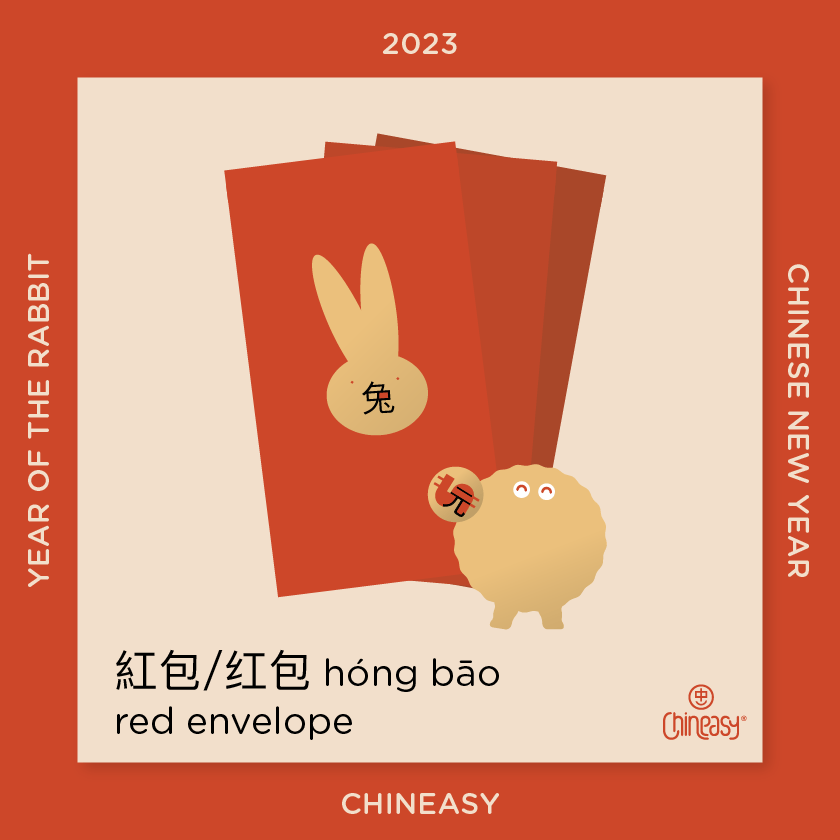 紅包/红包 (hóng bāo), aka hongbao, is a red envelope stuffed with cash. Parents give out 紅包/红包 to the younger generation during the Chinese New Year. However, when you start earning for yourself, you’re expected to give back to your parents. While we all love extra bucks to start the year, 紅包/红包 represents good luck and blessings for the year ahead.

👉 Fun fact: the cash inside hongbao has a special name – 壓歲錢/压岁钱 (yā suì qián), literally suppressing Sui money. Here, “Sui” refers to any evil spirits. Therefore, those who receive the money will be protected from misfortune and have a successful year. That’s why you might also hear people call 壓歲錢/压岁钱 lucky money!

Fashion is a big deal on New Year’s Day. The tradition is that Chinese people dress in new clothes on this day. Some people even push the boat out – EVERYTHING must be brand-new, from head to toe! Wearing new clothes (穿新衣; chuān xīn yī) is believed to bring good luck, rid the old, and embrace a fresh start with new swag.

👉 Fun facts: the custom of 穿新衣 dates back to the Northern and Southern dynasties (420-589 AD). Back then, people scrimped and saved so that they could buy the family new sets of clothes for the Chinese New Year. People also put on that exact new outfit for any special occasion in the entire year! 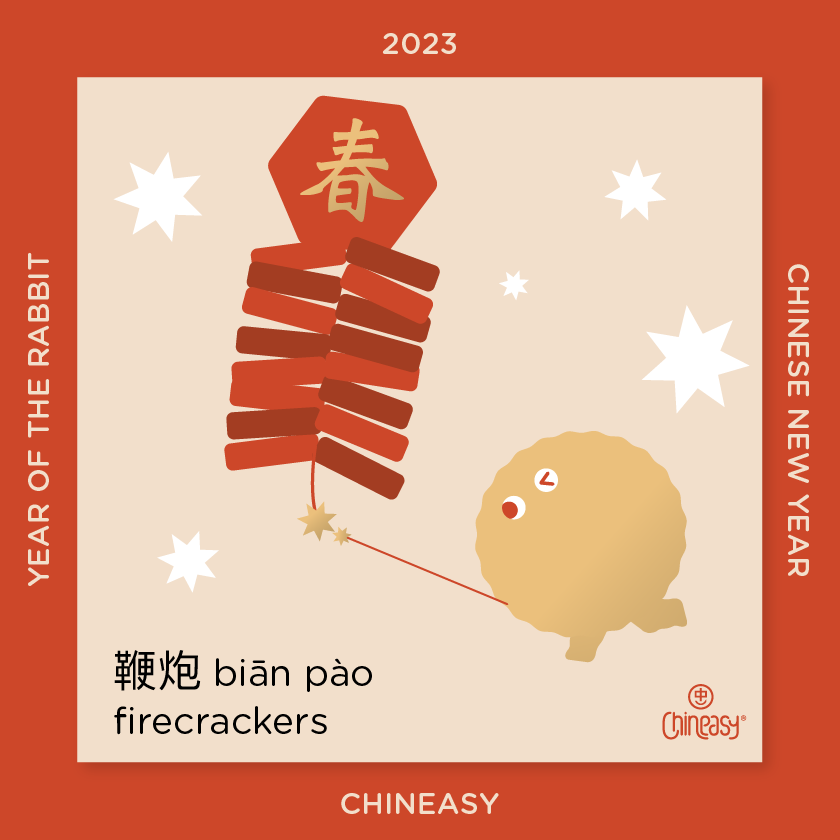 It is believed that setting off firecrackers (鞭炮; biān pào) is the most ancient tradition for the Chinese New Year. Originally, people lit off firecrackers to scare off mythical monsters and cast away bad spirits; in fact, it has been practiced for more than 2,000 years!

However, in 2023 we’re all about saving the planet, and we don’t welcome air pollution. As a result, more and more Chinese people nowadays opt for electronic firecrackers, which make flashy lights and sound without the smoke – a more environmentally-friendly option!

👉 Fun facts: Firecrackers are also known as – 爆竹 (bào zhú), literally, exploding bamboo. And yes, this does mean that the earliest firecrackers were made of bamboo 竹. 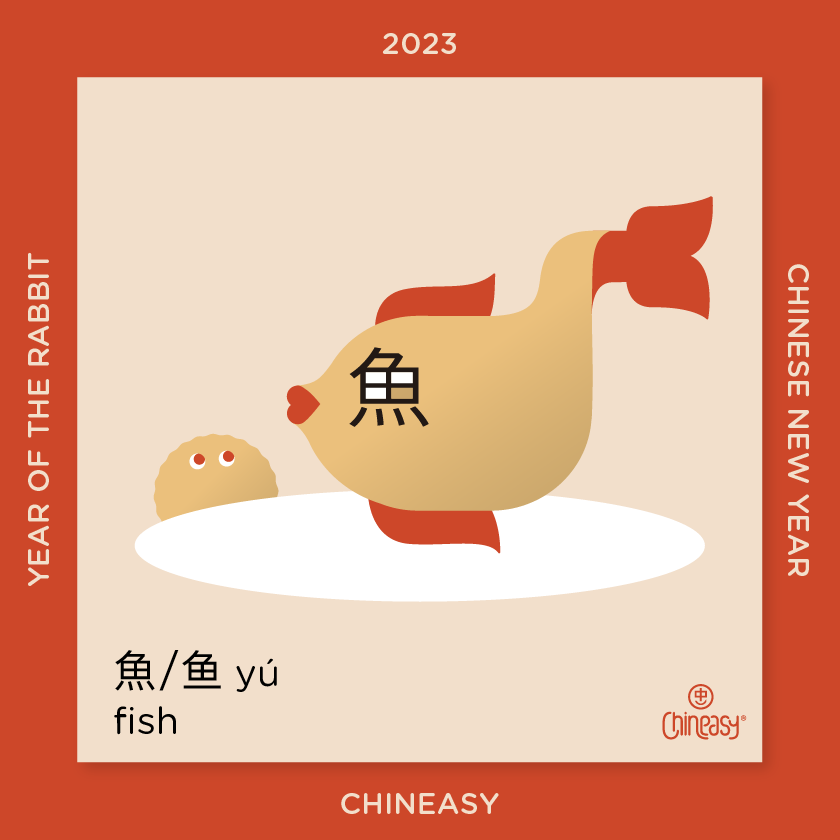 魚/鱼 (yú) is always a centerpiece at the New Year’s Eve reunion dinner table because its pronunciation sounds like the word for surplus/abundance. People make it a tradition to have it on the table in hopes of abundant food and wealth. The fish head is usually reserved for the guest of honor at the table.

👉 Fun facts: the fish served at the table must be a WHOLE fish, i.e. head to tail intact, which indicates a beginning and an end and thus signifies completeness.

In short, Chinese New Year is a rich and vibrant celebration steeped in tradition, history, and culture. From the red envelopes filled with money to the loud fireworks and lion dances, the Spring Festival is a time for families to come together, for forgiveness and for wishing for good luck in the year to come. It’s a time for cleaning the house and for putting away the old to make way for the new. It’s a time for delicious food and for giving thanks for the blessings of the past year. Whether you’re of Chinese descent or simply interested in learning more about this important holiday, we hope that this guide has given you a deeper understanding and appreciation of the many traditions that make Chinese New Year such a special and meaningful celebration.